The Farm "La Villa" was founded in 2010 with the purchase of abandoned lots located in the village of Garlenda, in the province of Savona. The low-lying agricultural areas in the Ligurian hinterland are small and rare, usually located near the bed of a river. Here the river is called Lerrone, gives its name to the valley and then became a tributary of the river Centa that leads to Albenga.

The Ligurian lands between Andora and Finale Ligure during the medieval period belonged to the family of the Marquis Del Carretto. In Garlenda the family owned a castle, called “Meriana”, now owned by the city and fully restored. The farm "La Villa" is located in the centre of town, right in front of the imposing castle, and in those times was cultivated with vineyards and olive groves. The castle can be visited inside today to see the wineries with the barrels that contained the original wine, Pigato and Rossese, produced in the fields of Garlenda.

The whole area of the Plain of Albenga, called “ingauna” by the name of the Roman city Albium Ingaunum, has for centuries been an agricultural vocation. Famous for it’s fertile soil due to nutritional supplements of the river Centa and for the particular conditions of it’s climate, the Plain has always produced vegetables. 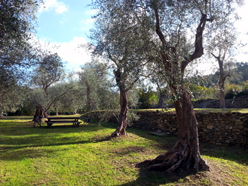 Well-known the so-called "Four of Albenga": purple asparagus, prickly artichoke, zucchini “trombetta”, tomato “cuor di bue”. The agricultural production changed over time on the changing demands of the market, through the flowers, to the production of aromatic plants in pots, to return today to a rediscovery of quality vegetables.

The farm "La Villa" is average farm size of Liguria, with about 7,000 square meters of cultivated area, as well as 2.5 acres of woodland and maquis.

The farm is owner-managed and produces income to meet the needs of a young couple. The land, back to life after decades of neglect, now produce: aromatic cut and potted herbs (rosemary and thyme), small fruits (especially strawberries), oil, honey, fruits and vegetables. 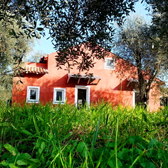